Last Night at the Viper Room: River Phoenix and the Hollywood He Left Behind 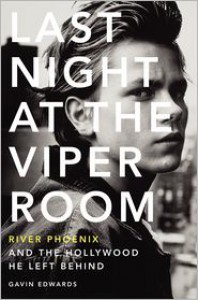 Way back when, River Phoenix was the object of my massive, teenage crush. Depending on your age, you might be nodding your head in agreement, or you might be asking yourself: “Who in the hell is that?” For those of you in the latter group, you might be more familiar with his younger brother, Joaquin Phoenix. River Phoenix was a child star who grew into a successful, Oscar-nominated actor until he overdosed outside of a Hollywood nightclub in 1993, at the age of twenty-three. My crush was over by that point, but I remember being so surprised, because the story line about Phoenix was that he was a clean-living vegan, and the idea that he died of a drug overdose was unthinkable.

Last Night at the Viper Room examines Phoenix’s brief life, beginning with his upbringing in what could politely be called a commune, but would more accurately be described as a cult. Sexual abuse of children was common and even encouraged, and Phoenix was a victim. In an all-too-familiar theme, Phoenix’s family tried to turn all their children into starts, beginning by forcing them to conduct musical performances on the streets for money. River soon became the family breadwinner when he began to land legitimate acting jobs. Today, we could create an endless list of fallen former child stars, but in the early nineties, before websites like TMZ exposed bad behavior for all to see, Phoenix was able to keep his drug addiction a secret from the public. Even while he wasted away and became more of a liability on film sets, he promoted his supposedly healthy lifestyle in interviews. All around him were the enablers who ignored the problem, because they were dependent on him for income: his family, his manager, his various directors. His death could not have come as a surprise to any of them.

Because Phoenix’s life was so short, Last Night at the Viper Room is equal parts biography and a look at the society in the early nineties among Phoenix and his acting peers, including Johnny Depp, who owned the nightclub where Phoenix overdosed. The book charts the early careers of other young actors at the time, including Depp, Brad Pitt, and Keanu Reeves, and the less successful/more depressing cases like Corey Haim and Corey Feldman. There’s not a a great deal of new information here, although it’s clearly well-researched and well-sourced. Missing are interviews with any of Phonenix’s family members, but that is not terribly surprising. I don’t think this book would be very interesting to people who aren’t already aware of Phoenix, unless they have a particular interest in the young celebrity culture of the early nineties. But for me, it was both an interesting and depressing path down memory lane.
Tweet